AFTER EIGHT years in the emergency room at Stroger Hospital, I came to work in Chicago Public Schools (CPS) as a certified school nurse (CSN). I was looking forward to making a difference in the health of young people through education. Through the process of becoming a CSN, I learned about the role of school nurses and how they have the opportunity to engage in many facets of health within a school community.

The common conception of school nursing is a provider of first aid to students, and while this is part of the job, it is not the only one. CPS employs three main classifications of nurses: certified school nurses, health service nurses and licensed practical nurses. For those who are interested in learning more about the similarities and differences between these jobs, Chicago Union Teacher published an excellent article on this in February 2016.

My favorite part of the job is when I am working directly with students. In this capacity we are not unlike other clinicians, such as social workers, speech pathologists or physical therapists. We work directly with the student to either provide a direct service such as managing their diabetes, or work with them towards greater health independence in regards to their medical condition. 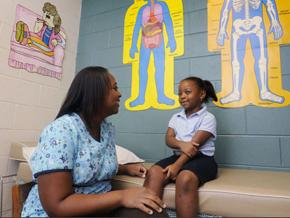 At least once a month, I will roam about a school, tracking down my caseload’s students to talk with them about their health. Earlier this year, one teacher took my interruption of her class as an opportunity to introduce me to her third graders. She asked where they can find me if they ever have health questions, and I told the class that I’m only at the school on Tuesdays. She turned to the class and said, “Okay students, if you ever need a nurse, make sure it is on a Tuesday!”

In my first year with CPS, I was assigned three schools. The next year, I was assigned five, and this year, I started with six, and it got dialed back to five. The start of this school year was particularly difficult for school nurses because many of the outside agency nurses had not completed the fingerprinting process and were not allowed to work.

As reported in the Chicago Sun-Times in October, this significantly impacted students with health needs. The shortage affected the entire school community, as gaps in care were filled with CPS nurses. While we were being redeployed around the district to provide direct services, all of our other responsibilities were put on hold.

A beneficial side effect of regularly interacting with students and teachers is that it puts me in touch with a lot of staff members. In our conversations, I will often be made aware of some new student health-related issue to follow up on. Without these interactions, these issues remain unknown, and the health of both the student and the school suffer.

If our city cared about the health of its students, every school would have a full-time nurse, and this would significantly improve the school’s education environment. Already, busy staff members are currently the ones who take on medical issues ranging from a paper cut to broken bones. Having a trained medical professional assess needs, notice patterns and build relationships with students would a much better solution.

CSNs ARE licensed educators and should be utilized as such. Our expertise could be put to use in front of students who are eager to learn about health. We could become an important part of the school community as health experts, and could tailor our lessons to meet the needs of the school.

For example, the rate of sexually transmitted diseases has increased for the fourth straight year, and one reason is steep cuts to public health clinics. Why not have nurses be part of the team that educates young people about sexual health and help turn this terrifying trend around?

Studies also have demonstrated the beneficial role that nurses can have on children with chronic conditions such as asthma. A 2006 study by the American School Health Association demonstrated an inverse relationship between school nurses providing regular education to asthmatic students and missed days of school. The healthier students are, the better their attendance, and the more ready to learn they will be.

To address nursing shortages, CPS recently announced 20 more nursing positions have been opened, but that’s woefully insufficient. A better start would be opening 200 nursing positions. Instead, CPS has asked the Board for $26 million for outside, private nursing agencies, many of whom have dubious track records. Those funds would be better spent to directly hire CPS nurses.

One of the demands won by the six-day United Teachers Los Angeles strike is hiring more nurses. According to one strike leader, Gillian Russom: “This might be the biggest victory — they’re committing to hire 150 nurses next year and an additional 150 the following 2019, for a total [of] 300 nurses, which puts a full-time nurse [in] every school.”

While this short article has hopefully shed some light on the situation that nurses face, I encourage all of us to take time out of our busy schedules and talk to each other about what is going on. We should be on the same page regarding the current state of school nursing, what the future holds and what it will take to get there.