Why did they rebel?

James Illingworth looks beyond the lies and distortions of politicians and media commentators at the real causes of the rebellion that swept cities across Britain.

A WAVE of repression and racist fear-mongering has followed the urban rebellions in Britain--with politicians and pundits alike ignoring the real causes of the unrest and demanding a police-state clampdown on Black and working-class communities.

The right-wing coalition government led by the Conservative (or Tory) Party and the Liberal Democrats is attempting to create a narrative in which, rather than an unplanned outburst of anger, the riots were a premeditated scheme on the part of organized criminals. In parliament, Prime Minister David Cameron blustered that "gangs were at the heart of the protests and have been behind the coordinated attacks."

This myth-making serves to justify a full mobilization of state terror against young people and working-class neighborhoods. MI5, the British equivalent of the FBI and an institution usually tasked with counter-terrorism activities, has been brought in to catch suspected rioters. Police have carried out coordinated raids on homes in several cities, arresting thousands of people. 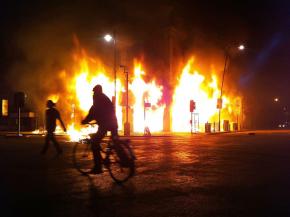 Court proceedings and sentencing have been highly punitive, with children as young as 11 years old dragged into court for allegedly throwing stones and breaking windows. Young people accused of participating in the rebellion have been given long jail terms for minor offenses. As the Guardian newspaper reported:

In Manchester, a mother of two, Ursula Nevin, was jailed for five months for receiving a pair of shorts given to her after they had been looted from a city center store. In Brixton, south London, a 23-year-old student was jailed for six months for stealing £3.50 worth of water bottles from a supermarket.

Meanwhile, the media are creating a climate of racist hysteria and reaction. The BBC's flagship news show Newsnight provided a platform for conservative historian David Starkey to pontificate about the violence inherent in Black culture and bemoan the fact that "whites have become Black." The same show also recently hosted Tommy Robinson, a leader of the fascist English Defense League.

The Tory-led government and its media lackeys will never admit the true causes of the rebellion: poverty, austerity and police brutality.

THE ECONOMIC crisis that began in 2007-2008 has destroyed the futures of millions of young people across Britain. Poor and working-class neighborhoods in London and other cities--particularly Black neighborhoods--already suffered from desperate poverty and inequality. But the return of mass unemployment, especially among young people, has exacerbated these conditions.

The Great Recession has become close to a Great Depression for young people in Britain, just as it has in countries like Egypt, Greece and Spain. While the official unemployment rate in Britain is around 9 percent, youth unemployment is closer to 20 percent--and in London, more like 25 percent. Among Black youth, unemployment is in the 40-50 percent range.

Cameron's coalition government has embarked on a program of cuts that has devastated access to education and social services for poor and working-class youth.

At the end of last year, the government abolished the Education Maintenance Allowance, which provided a small weekly grant to poor students. The maximum university tuition was raised to nearly $15,000 a year, and more than a third of Britain's 123 universities charged the full rate. Between the two, these measures virtually guaranteed that young workers will be forced to end their education at age 16.

The cuts are biting in other areas, too. For example, The local council in Haringey--which includes Tottenham, the epicenter of the riots--announced a 30 percent cut in its roughly $450 million budget. That includes 75 percent cuts to programs and services for youth in particular--and will lead to the closure of eight out of 13 youth centers in the area.

The immediate causes of the rebellion, though, were police brutality and racism. The murder of 29-year-old Black man Mark Duggan by police, which provided the initial spark for the riots in Tottenham, was just the latest and most dramatic act in a pattern of police harassment of Black youth in North London.

Police regularly target young Black men and women with daily searches and bullying. In Tottenham, two-thirds of those stopped by police are young people aged 25 and under. Black youth are stopped by the police three times more often than their white counterparts. As veteran Black media commentator Darcus Howe said in an online video, ""[Police] have been stopping and searching young Blacks for no reason at all."

And as the case of Mark Duggan shows, encounters with police can prove deadly for working-class and Black people. Almost 350 people have died in or immediately following a period of police custody since 1998, but no officer has ever been prosecuted.

Nevertheless, police brutality has come under increased public scrutiny since the death of Ian Tomlinson during protests against the G20 in London in 2009. More than two years after officer Simon Harwood struck the peaceful bystander Tomlinson from behind with a baton, leading to his death, Harwood was finally charged with manslaughter earlier this year.

It's no surprise, then, that young participants in the rebellion scrawled the slogans "Fuck the Police" and "Fuck David Cameron" across the walls of British cities. They understand much more clearly than he does what their actions represent--an uprising against a police force, a government and a system that have ruined their lives.